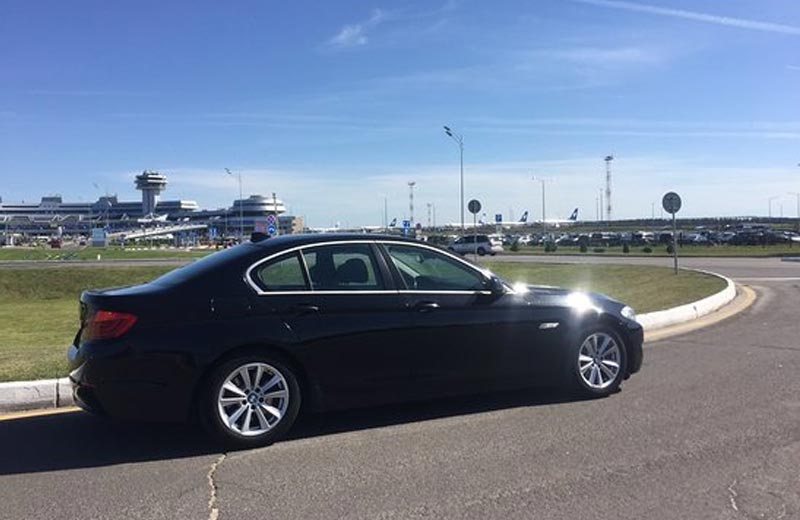 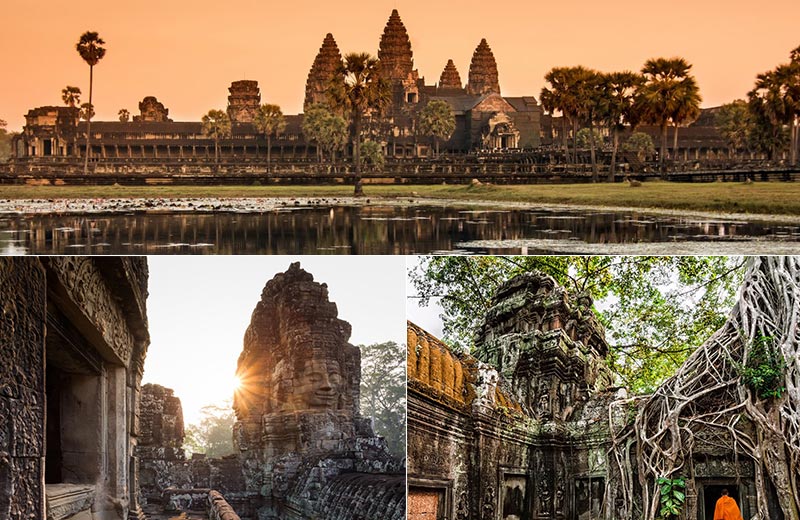 The City of Angkor is one of the grandest monuments ever constructed. The entire complex covers approximately 164sq miles with over 200 temples. Among the 30 temple that are accessible today, the most famous is Angkor Wat, the largest religions building in the world, with a volume of stone equaling that of the Cheops pyramid in Egypt. Conceived by Suryavarman II early 12th century, Angkor Wat took an estimated 30 years to build. Unlike most other Khmer temples, it faces west; the most likely reason is because the temple was dedicated to Vishnu, who is sometimes associated with the West.

The Bayon or state temple of Jayavarman VII is one of the most enigmatic and power religious constructions in the world. It is a unique mass of “faces tower” which create a stone- mountain of ascending peaks. There were originally 49 towers of which 37are still standing today. Most are carved with four faces on each cardinal point. The central tower has many more.

Ta Prohm Temple (Tom Rider Movies) Ta Prohm was built in the 12th century by Jayavarman VII as a royal monastery. It was dedicated to the king’s mother. This temple was chosen to be left in its natural state as an example of how most of Angkor looked, upon its rediscovery in the 18th century. Shrouded in jungle, the temple of Ta Prohm is ethereal in aspect and conjures up a romantic aura with gigantic roots and branches intimately intertwined with the stoned and probing walls to form a natural roof above the man-made structures. 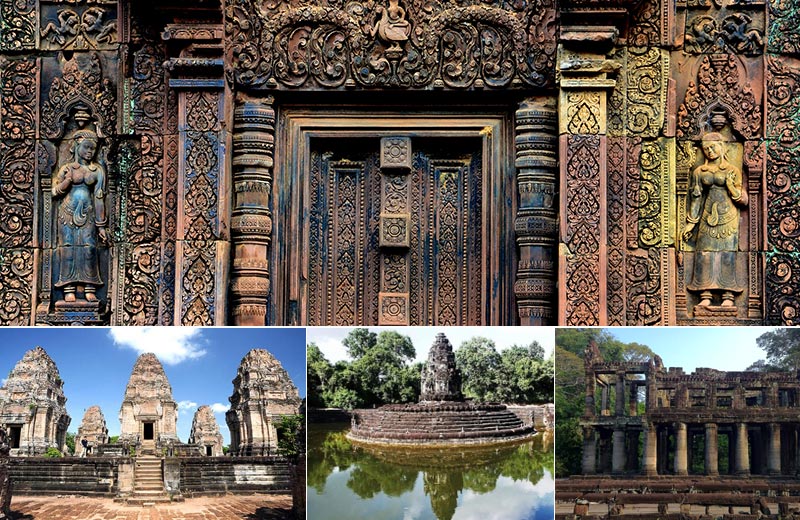 Banteay Srei Temple is the most exquisite temple in the complex. Banteay Srei is the “Citadel of woman” or “Citadel of Beauty” presumably referring to its size and the delicacy of its decoration. Unlike the major sites at Angkor, Banteay Srei was not a royal temple. It was built not by the kings, but by Brahmin Priests often described in teams as the “Jewel of Khmer Art” Banteay Srei is a temple of great beauty, and compares with little else in Angkor. Its miniature scale almost always surprises visitors, and the near total decoration of its surfaces are exceptional. For its protection, the most inner spaces of the temple are closed to public.

Neak Pean Temple ‘Neak Pean’ in Khmer meaning as ‘Nagas Intertwining Tails’, due to two Nagas, which one on the right is believing as the male and another on the left was considered as female (Nagin), they put their bodies at around the temple base and their tails joining altogether. The Naga and Nagi intertwining are the symbol of intercourse action of their happiness.

Preah Khan Temple Build in the 12th century was one of Jayavarman VII’s largest projects dedicated to his father. Preah Khan was much more than a temple with over 1,000 teachers it appears also to have been a Buddhist university as well as a considerable city. You can cross Preah Khan from the East to west or vice versa. As you walk, be aware by the magnificent stone sculptures of giant garudas, each one grasping the tail of a naga, its traditional enemy, in each hand. He restorations of Preah Khan is currently undertaken by the world Monuments Fund, a US based foundation. 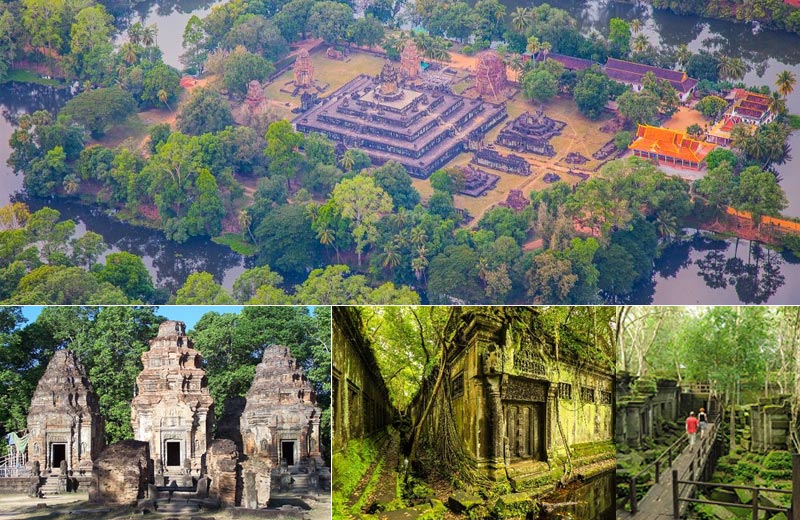 Bakong Temple Bakong is located at Roluos Group south of Preah Ko. Enter and leave the temple at the east. A modern Buddhist temple is situated to the right of the east entrance to Bakong. It was built in late century (881) by king Indravarman I dedicated to Siva (Hindu) followed Preah Ko art style.

Preah Ko Temple was the first temple to be built in the ancient and now defunct city of Hariharalaya (in the area that today is called Roluos), some 15 kilometers south-east of the main group of temples at Angkor, Cambodia. The temple was built under the Khmer King Indravarman I in 879 to honor members of the king's family, whom it places in relation with the Hindu deity Shiva.

Beng Mealea Temple is oriented toward the east, but has entranceways from the other three cardinal directions. The basic layout is three enclosing galleries around a central sanctuary, collapsed at present. The enclosures are tied with "cruciform cloisters", like Angkor Wat. Structures known as libraries lie to the right and left of the avenue that leads in from the east. There is extensive carving of scenes from Hindu mythology, including the Churning of the Sea of Milk and Vishnu being borne by the bird god Garuda. Causeways have long balustrades formed by bodies of the seven-headed Naga serpent. 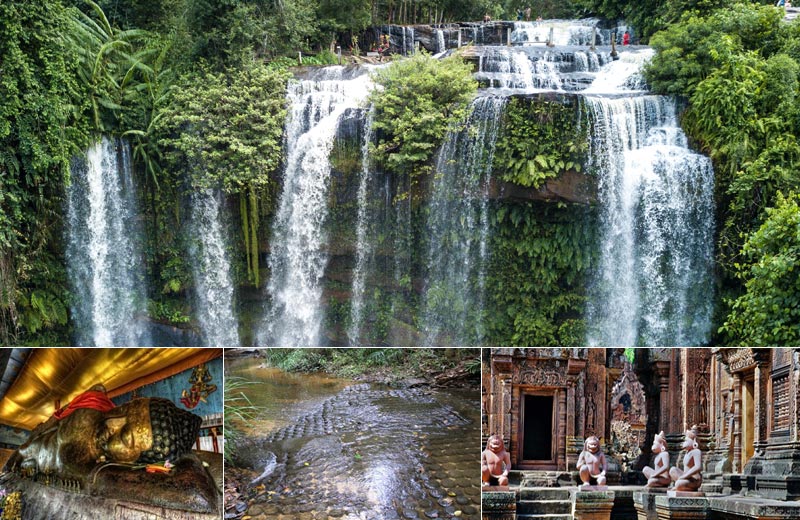 Kulen Mountain Water Fall (Thousand Linga) For it was at Phnom Kulen that King Jayavarma II proclaimed independence from Java in 804 CE. Jayavarman II initiated the cult of the king, a linga cult, in what is dated as 804 CE and declaring his independence from Java of whom the Khmer had been a vassalage state (whether this is actually "Java" or "Lava" (a Lao kingdom) is debated, as well as the legend that he was earlier held as a ransom of the kingdom in Java. See Higham's The Civilization of Angkor for more information about the debate).During the Angkorian era the relief was known as Mahendraparvata (the mountain of Great Indra). The site is known for its carvings representing fertility and its waters which hold special significance to Hindus. Just 5 cm under the water's surface over 1000 small carvings are etched into the sandstone riverbed. The waters are regarded as holy, given that Jayavarman II chose to bathe in the river, and had the river diverted so that the stone bed could be carved. Carvings include a stone representation of the Hindu god Vishnu laying on his serpent Ananta, with his wife Lakshmi at his feet. A lotus flower protrudes from his navel bearing the god Brahma. The river then ends with a waterfall and a pool.

Banteay Srei Temple is the most exquisite temple in the complex. Banteay Srei is the “Citadel of woman” or “Citadel of Beauty” presumably referring to its size and the delicacy of its decoration. Unlike the major sites at Angkor, Banteay Srei was not a royal temple. It was built not by the kings, but by Brahmin Priests often described in teams as the “Jewel of Khmer Art” Banteay Srei is a temple of great beauty, and compares with little else in Angkor. Its miniature scale almost always surprises visitors, and the near total decoration of its surfaces are exceptional. For its protection, the most inner spaces of the temple are closed to public.

This incredible luxury Somadevi Residence has everything you could want, and it begins with this: a coveted 2018 TripAdvisor Traveller's Choice Award. The hotel is situated right in the center of Siem Reap. The main street - Pub Street - is just a 10-minutes walk, and there are many supermarkets within 5 minutes walking.

Tropical plants line the center area of the residence to give a real oasis-like feel,

and huge goldfish bubble away in a pool next to the restaurant and bar areas. Outside the hotel you'll find fruit and vegetable markets, and the hotel has an excellent on-site cafe if you're after a quick coffee. The UNESCO World Heritage rated Angkor Ruins, including the infamous Angkor Wat, is just 7km from the hotel